Meditation for a peaceful and positive change for Chilean citizens!

Take the opportunity to contribute your energy to the manifestation of a united, peaceful Chile with a process of positive change for the benefit of Chilean society! 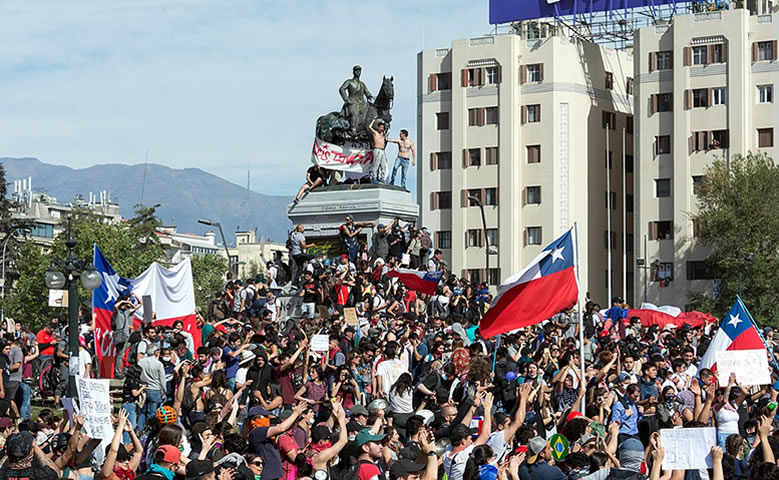 In Chile, due to a sum of problems (very low pensions, increased electricity and transportation rates, poor public medical service, privatization of drinking water service, poor education system, etc.) that have been accumulating for years There began to be protests and marches that escalated through the days, as there was a lack of concrete actions by the government to meet these social demands. A change was made of some members of the government cabinet as a solution to the problems, which was perceived as a superficial political exit of little credibility by Chilean citizens who maintain a widespread feeling of being cheated by the current socio-economic system. To all this, the government's decision to deploy the military caused an escalation of violence and human rights abuses, with 20 citizens killed, more than 3000 people arrested and a large number of people injured.

The current government has failed to meet the social demands that have been delayed and ignored for years until reaching the current situation in which more than one million people take to the streets asking for a real change, frustrated due to the inability of a political class that does not agree, that has lost credibility and cannot raise a real agenda change with agile solutions to current problems.

The government was proposing a change of cabinet for a current situation that requires a change of agenda, so far, the political class fails to agree to set an agenda that truly meets the needs of the Chilean people.

According to the opinions of many people, the government program of the current president Sebastián Piñera is not headed in the right direction, so a new agenda must be re-considered taking into account the underlying problems of all sectors. This is complicated when the political elites are very distant from the social bases, having little communication, much distrust, lack of honest will on the part of the political class to meet social demands, etc.

We have to understand that this current problem of social upheaval is the effect of many causes added over the years, to a large extent, the product of the collective overconscious of all Chilean citizens that has not been attended at the time by the class policy of that time, provoking in the long run this current situation in which the repressed society cannot be contained for longer. This situation is a great opportunity for the Chilean population to release these obscurities and / or dense energy crystallizations of the collective subconscious and manage a positive change towards a better quality of life for everyone in general.

According to a report called "Social Panorama of Latin America" ​​of ECLAC (Economic Commission for Latin America) in reference to Chile, it is discovered that the wealthiest 1% of the population remained in 2017 with 26.5% of national net wealth, while 50% of the less wealthy population kept 2% of Chile's national net wealth; This clearly indicates a very marked inequality that is part of the underlying problem of the current situation in Chile.

President Sebastián Piñera and his cabinet, as well as the political class in general, are a reflection of the collective social conscience of Chile. It is the reflection of the collective unconscious and we can affirm that if a large part of Chileans become aware of this and work with ourselves, we can dissolve that political chaos much faster. The solutions to the problems of each sector will be elucidated and a new agenda will be created in favor of the citizens. This is possible if we work consciously with ourselves and others through meditation as a technique, among many others.

It is important to realize that if we carry out this process consciously, through meditation and prayer, we will be accelerating this process as well as making it much more peaceful and synchronous. That is, we leave the resistance behind in the form of fears, anger, anger, anguish, sadness and we empower ourselves with conviction, with Faith, with peace, with happiness, with love radiating to the current situation, understanding that there is a peaceful solution and Perfect around the corner.

We are creative beings, we attract what we feel, therefore, logic tells us that if we meditate and pray with feelings of integrity, love, peace, uniqueness, solidarity, humility, conviction, etc. we will be dissolving in us of the collective unconscious all those fears, anger, resentment, etc. thus achieving, attracting for Chile only what corresponds to us by divine right, a Chile with better working conditions, peace dignity, greater access to studies.

To participate in group meditations on the internet, you can follow the following recommendations:

Take advantage of these meditations! Apart from learning, sharing, healing, contributing to social welfare, you will be raising awareness!